My patient and friend Dawn studied Buddhism in Nepal many years ago and has practiced diligently ever since. One of her teachers from there, Lama Zopa Rinpoche, does a great deal of traveling and was recently in Santa Fe, where she was able to see him. At her next appointment, she brought me a card depicting the Medicine Buddha, which he had blessed. She said that she knew it was supposed to be for me.   Here is a similar depiction: 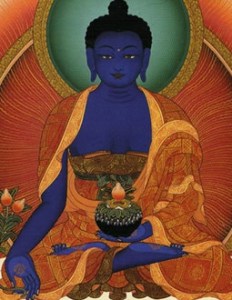 When Dawn put the card into my hands, it seemed to be vibrating, as if it were alive. Lama Zopa’s blessing and intentions seemed to be totally, intensely present still. I had been having an extremely hard time that day, and nearly burst into tears at the generosity and kindness of this gift, which came to me precisely when I needed it most.

But strangely, despite having heard of him many times, and despite the obvious connection to my line of work, I knew nothing of the Medicine Buddha. Those of you who are familiar with my business name or have been to my office know of my love for the image of Kuan Yin and my aspiration to bring some particle of her vast compassion to my work with my patients. I had been content with her, and perhaps it hadn’t yet been time for me to confront this colleague of hers in the cosmic healing arts. Yet it feels now as if he may have always been there in the background.

As soon as I got home, I began reading about this Buddha, Bhaisajya in Sanskrit. I learned that he is the original doctor, the archetype of doctors I would say, though Buddhism does not use that term. I saw that in his left hand he holds a bowl like those used to mix medicines since ancient times, containing the healing he offers to all those who need it.

The article that made the most connection for me was this, though it unfortunately contains a tangle of confused symbols where diacritical marks didn’t make it onto the website properly:
https://www.wildmind.org/mantras/figures/bhaishajyaguru-medicine-buddha-mantra
An essay included in this article touched me profoundly. The author, Srivandana, has struggled all her life with poor health, but she perseveres in her practice and her faith that she can transcend the ills of her body. “I have raged against the certain knowledge that there is no physical healing for me in this lifetime,” she wrote, bringing me again to tears.

Srivandana wrote about the myrobalan fruit that Medicine Buddha holds in his right hand. Used commonly in Ayurvedic and Tibetan medicine, it is called He Zi in the Chinese pharmacopeia, where I learned it as a relatively minor herb. Bitter and sour, it can stop dysentery and cough and restore the voice. What Srivandana described was a terrible tasting medicine, so bitter that one recoils from swallowing it. Yet once one faces the need for it and gulps it down, it brings ease, joy and understanding.

This is the medicine, as Srivandana experiences it:   “The law of impermanence is the most beautiful thing I can possibly imagine. I have made a practice of contemplating impermanence and recognizing that everything is insubstantial and therefore painful and unsatisfactory. Reflecting on impermanence, allowing it to permeate every pore, every particle of my consciousness, rocks me to the core of my being. I feel as though I have been turned inside-out. Yet the law of impermanence is full of potential and is permeated by the beauty of change. The knowledge that this change lies in my hands, and that I can take responsibility for its coming into being, is hugely empowering.

“The medicine of the Dharma has to be drunk by the gallon, bathed in, fully absorbed. The vast sea of Dharma stretches into the distance, but a single drop can go a long way. Bhaisajyaguru also points out the danger of finding oneself in a void of impermanence, without beauty and without sustenance. I need the beauty that I touch through making art and listening to music, through communicating with spiritual friends; as well as the sustenance gained from meditation, in particular meditation on the sublime abodes of positive emotion, or brahmaviharas.”

Soon I had my own experience of this medicine and the challenge of drinking it. It was the morning after I had a lengthy late-night counseling session with my mentor Mendy Lou Blackburn, the day after a day of unusual depression and anxiety. As I came to consciousness, still half-dreaming, I was contemplating a mental image of Bhaisajyaguru, thinking about what I had read and heard. The image seemed to come alive, and the kindly being held out the bowl toward me, asking me to drink. I took the bowl into my own hands and put it to my lips, but could not make myself take the liquid. After some struggle and some encouragement from him, at last I drank.

I felt a rush through my body and wondered if it was the transformation I was asking for. Something did feel different and better. I asked exactly what the medicine was, what it was meant to do, and I received an answer that was broad and deep. I was planning to write about it right away, as it seemed clear at the time, but I can’t remember what I was told. I know something got into my head that made perfect sense, but then it sank out of my conscious sight. I’ve been told that Medicine Buddha’s teaching is like that, that it acts at a deeper level than the objective mind and can be hard to describe. As far as I can recall it was along the lines of what Srivandana wrote, about change lying in my hands and taking responsibility for my reality coming into being, and the wondrous knowledge that this is possible.

Mendy Lou said that the illness is resistance and the cure is letting go, knowing that all is provided. Or something like that. Part of the little I recall had to do with acceptance of what is, at the same time that one realizes the power to create and transform.

And on so many levels I have been needing a medicine to restore my voice, so greatly needing that.  At the time I didn’t realize that this is a major function of the herb Bhaisajya carries.

I didn’t “believe in” the Medicine Buddha any more than before. I didn’t feel that I had been in contact with a “real” entity in real time, but rather that I was in a dream sort of state and my own mind entirely constructed the encounter with Bhaisajya. But a couple of weeks later I was treating another patient who keeps up her Buddhist practice, and I put on the recording of the Medicine Buddha mantra in Tibetan that I’ve linked below. Mendy Lou came in near the end of the treatment and was sitting in the waiting room, also listening to the chanting. When she and I are in the same space, it seems, it’s easy for all sorts of things to manifest, and I suspect her influence had something to do with what I saw. As I sat with my hands near my patient’s head, lapis blue arms appeared just outside mine, cradling me and adding their own nurturing energy. I felt Bhaisajya’s strength and gentleness, and he seemed at least as real as I.

As usual, I don’t know what this means, but I accept it gratefully.

https://www.youtube.com/watch?v=yUJucA-mrgE
Medicine Buddha Mantra:  I came across this accidentally, but at just the right time, and I have drunk it in as if it were critically needed nourishment, listening over and over, singing and playing it. I don’t know why it has such a deep effect. When I’ve played it during treatments my patients have reported a profound experience.

Here is a rather technical article about Medicine Buddha and his relationship to other celestial beings: https://en.wikipedia.org/wiki/Bhaisajyaguru

One response to “Medicine Buddha”