Things You Can Do When You’re Dead! and Some You Can’t 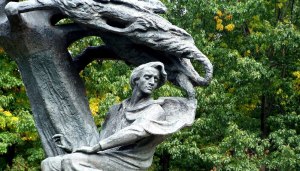 Whatever he’s doing, it’s not this.

Lawrence Spencer wrote 1001 Things You Can Do While You’re Dead: A Dead Person’s Guide to Living, which looks absolutely hilarious.

Tricia J. Robertson wrote Things You Can Do When You’re Dead!: True Accounts of After Death Communication, which looks intensely interesting.

I haven’t read either of these books yet, but I can definitely say that both authors are among the not-dead. Descriptions of the lives of the dead— you can see that language gets tangled right away— by dead folks themselves are abundant, but not necessarily all that clear to those of us still on this side of the veil.

On 9/10/19, after reading through some short Mozart pieces that I hadn’t been familiar with at the piano, I got to wondering if Fryderyk has any kind of relationship with his idol, or ever sees him. I was pleased to find myself easily getting in touch with him and able to have a clear conversation, which is still a fairly rare occurrence.

It seems that nobody really has a relationship with Mozart or gets to talk with him these days, from what Fryderyk told me. He is something of a recluse (we both struggled to find the best word for his situation). I was surprised, since I think of Mozart as a pretty gregarious person. He is secluded in a kind of chamber in which he is in meditation and in communication directly with the Divine Source. The image of a huge column of light streaming down, cascading into him, was strong, but I can’t say I really understood this whole concept. It had almost a science fiction movie flavor.

I wondered if Mozart had become almost a sort of deity himself. I’ve thought of him as something like that, but at the same time, the original planet-based Wolfgang seems so down to earth. It’s interesting to contemplate.

I wondered if they have any involvement with trying to help our dire situation on our dying planet. He said, firmly, that this is the responsibility of those who live on the planet at present, that we wanted and intended to be here and deal with this, that it is “your burden.”

But obviously Fryderyk is involved heavily with the earth plane.

I asked about his relationship with Liszt, having recently heard a 1955 Leslie Flint track* in which the Chopin voice spoke of his friendships with Liszt and Mendelssohn. What is Liszt getting himself up to lately? Is he still involved with us groundlings too?

He showed me Liszt reaching toward us on earth, like a hand reaching down into the atmosphere to tweak things here below.   How is that different from what he does himself? He works by entering directly into the human heart, from the inside, he said, instead of imposing something from the outside.

But seriously, I insisted, things are not looking good around here. I asked if he had any advice for those of us tasked with getting through the next few decades. He said, “Your love of life must become greater than your love of death.”

I was trying to ask about what they do all “day,” something I am endlessly curious about, especially since it is more or less what we all will be doing eventually. In the Leslie Flint session I mentioned, the Chopin voice described having a salon in which he and other musicians played over their recent works and gave each other suggestions. We’ve heard before that at least for the more recently dead, life feels much the same as it did when they inhabited physical bodies; they appear to wear clothes, live in houses, walk about in gardens, etc. At the same time, we are told that there are so many aspects of their existence that we can’t fathom with our limited senses.

Perhaps those two things are not contradictory. I’m reminded of an anecdote from Rosemary Brown, in which she described a visit with Debussy, who brought one of his new nonphysical paintings to show her. If I remember correctly, the subject of the painting was a peacock; whatever it was, it moved around and morphed in a way that physical paintings can’t manage. Apparently he was having a lot of fun with this art form.

Michael Tymn’s latest blog post uses the Eiffel Tower as a clever metaphor for the various planes or spheres in which spirits find themselves at different levels of development.
http://whitecrowbooks.com/michaeltymn/month/2019/09/
He also discusses the naive and fallacious supposition that spirits should be expected to know anything and everything simply by virtue of being spirits. This is useful. My only quibble with his construction is that it is overly linear; spirit communicators tell us that they do exist in “higher” or “lower” spheres, but we are also told that any one spirit personality (or personality here on the planet) is only a part of a larger entity, and that the parts of that larger entity may have more or less expanded awareness. I think we need to consider that linear time, which is necessary for the concept of development or evolution, is not really fundamental to reality, but more a product of our way of experiencing it. Again, I don’t pretend to have a thorough understanding of these matters.

*https://www.leslieflint.com/chopin-july-7th-1955   There are a number of new Chopin recordings and transcriptions at this site since I last wrote about it here, and the website is easier to use. Note that they are using Mary-Rose Douglas’ beautiful and evocative transformation of the 1849 photograph for their portrait of Chopin, this one: 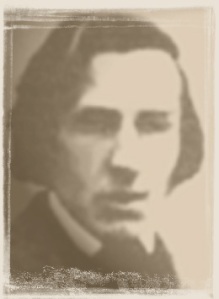 9 responses to “Things You Can Do When You’re Dead! and Some You Can’t”