Another Human Being’s Identity Is Not Yours to Dictate

(Rant Advisory! I am as upset about this as if it pertained to my own child, or to me.)

So very often I am reminded of the old song that goes “None of us are free if one of us is chained.” It adds, “And if we don’t say it’s wrong then that says it’s right.”

Sometimes the chains are kept locked by those who think of themselves as far beyond bigotry or intolerance.

In the past week I have encountered two attacks against transgender people that appeared on the surface to have some higher intention. Both were warmed-over versions of old arguments.  One came in the form of a supposedly spiritual look at gender identity through the lens of reincarnation, and the other purported to be a principled defense of the rights of women by a feminist group.

I could call out the “spiritual” thinker by name, but I’m not going to, because his presentation is not just his own but represents a turn of thought that is all too common. It’s been used against gay people, too. The idea is that if you are not comfortable twisting yourself to fit into a gender-binary, heteronormative life, it’s because you were a different gender in a previous life, and either through confusion or through willful stubbornness, you are still clinging to identification with that gender. If you persist, you are stupid and bad. You should just get over it and move on, and then you’ll be fine.

This is the exact same paternalistic crap promulgated by religious groups who insist that God made you either male or female and that’s that. God doesn’t make mistakes, and so if you don’t feel right in your body, you are going against God, and therefore you are sinful and bad.

I’ll get to the so-called feminists later. First, I want to take a look at exactly what God/nature/biology did make. Because we do have some actual facts to work with.

While it would be nice to have human reproductive biology all wrapped up in a neat, understandable package, the more we learn, the more we see that things are complex and fuzzy. “Male” and “female” are not definite categories with hard edges. I’m sorry if someone dislikes this, but it’s reality. Some easily accessible sources of information follow.

http://www.isna.org/faq/ten_myths/rare
According to this, about 1 in 2000 humans are intersex. Another source estimated 1.7% of births. That’s a lot of people. Some may never realize they are anything but typical male or female, or may only find out late in life. One person I’ve read about was a seemingly ordinary middle-aged man with a bunch of kids, who had an abdominal surgery and was found to have a uterus in addition to his full set of male reproductive parts.

https://medlineplus.gov/ency/article/001669.htm
There are a variety of possible intersex conditions, with varying appearances and health considerations, briefly summarized in this article.

If that’s not enough, take a look at the fascinating case of the guevedoces. A few weeks ago I learned about them in an excellent PBS program, Nine Months that Made You. In the Dominican Republic, about one in 90 boys have this condition, which has also been found in Papua New Guinea. They have XY genotypes like “regular” boys, but they lack an enzyme that is needed to develop male genitalia in the womb, so their parents think they are girls and raise them that way. At puberty, they have the usual surge in testosterone and become obviously male all of a sudden. Of course, they were biologically male all along.
http://www.pbs.org/show/9-months-made-you/
http://www.newsweek.com/rare-condition-causes-girls-become-boys-puberty-374934

So are we clear now that external genital configuration does not equal gender? Likely we’re not clear at all and I’m still going to get a big argument from those who insist on a binary world, but in that case, they’re going to have to register their objections with God, because this is the way nature is put together. A religious and/or spiritual viewpoint, it seems to me, would have to say that there must be a good reason for things to be this way. A purely materialist viewpoint would say the same— that nature has shaped human bodies and brains in a dazzlingly diverse variety because it’s been helpful to our survival.

Some might then point out that transgender people are not the same as intersex people, and that most probably have clear male or female genotypes or phenotypes. But there appear to be differences from cisgender folk in those cases too, albeit subtler ones. As far as we can tell, transgender people have brains that function more like the gender they say they are rather than the one indicated by their genital apparatus— though this too is complex and a bit fuzzy.
http://www.scientificamerican.com/article/is-there-something-unique-about-the-transgender-brain/

Here is a link to another useful PBS program.
http://www.pbs.org/wgbh/frontline/film/growing-up-trans/
What struck me most about it was that the kids decidedly look like the gender they say they are. That’s not a hard scientific fact, but to me, it reinforces the concept that there is a physical basis for being transgender.

I don’t pretend to understand much about these aspects of our biology, nor how they fit with how we become who we become when we enter a new life on this planet, or what choices we have or don’t have about our embodiment. My conjecture is that gender exists as a spectrum so that we can experience every permutation of it, but that’s not fact. What I know for sure is that it makes no sense to tell others how they feel inside themselves— either how they do feel or how they should feel. It’s illogical and it’s just plain mean. And when it’s coupled with a holier-than-thou or more-enlightened-than-thou message, it’s positively sickening. 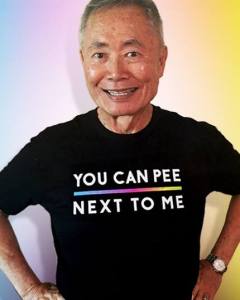 Now, to the lawsuit filed by the Women’s Liberation Front, or WoLF. It’s the bathroom thing again, same as the extreme right’s fearmongering, strangely enough. They are insisting that “men” in women’s restrooms are a threat to women’s safety. I’m not going to rehash the reasons why trans women are no threat to cis women in this context (or anywhere else, really). You can find those all over. I’m only going to point out that trans women are not men. In their brains, the part of the human body that matters most, they are women. So denying ordinary human rights to those women cannot be feminism. Not in any way I can recognize it.

The latest post on WoLF’s Facebook page, in reference to the rule allowing kids to use school facilities consistent with their gender, states: “Girls’ rights to personal privacy and freedom from male sexual harassment, forced exposure to male nudity, and voyeurism have been eliminated with the stroke of a pen.” This makes my stomach churn. I am of course not a trans girl trying to navigate high school (which is hard enough for the rest of us), but reading this, I can viscerally relate to what they experience. It is terrifying. To be just a kid and know that others assume you are a sexual predator, when all you want to do is attend PE class and not get beaten up… to be hated and censured by “righteous” people one has never met… it boggles the mind and even more the heart. Imagine being, say, a second grader, too young even to have a concept of voyeurism or anything like it, having no idea why people are saying these terrible things about you.

(Please note that I don’t mean to ignore trans boys.  It’s just that WoLF seems to be targeting trans girls and women specifically.)

WoLF’s lawsuit clearly contradicts two of their main stated goals, and they seem to have no clue that this is the case. The home page of their website says: “WoLF is a radical feminist organization dedicated to the total liberation of women. We fight to end male violence, regain reproductive sovereignty, and ultimately dismantle the gender-caste system.” The total liberation of women has to include ALL women, not just the ones who look a certain way. Dismantling the gender-caste system (a laudable goal) has to mean completely dismantling, so that no gender is discriminated against.

Why should we settle for anything less?