It Couldn’t Have Happened 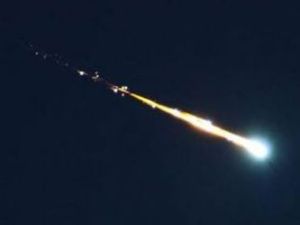 When I was a kid I had what appeared to be a persistent memory of something that happened when I was very small. A meteorite fell in my Aunt Betty’s back yard and met its fiery doom one evening while we were having a cookout or something. I can still see the image of a large sphere, at least a foot or so across, burning in patches and dark elsewhere, with a crater around it, not too much bigger than the sphere itself. The image is vivid.

But that could never have happened. A fraction of a second’s thought will tell you that meteorites just don’t work that way. And if a substantial one had fallen anywhere in Girard, Ohio in the early 1960’s, and pieces had reached the ground still being 12” or more in diameter, the destruction would have been epic and everyone would have known about it.

At some point while I was still a kid, I happened to mention to my mother, “that time the meteorite fell in Aunt Betty’s back yard.” Of course she told me that no meteorite had ever fallen there during my lifetime. I was shocked to realize that my memory wasn’t real. I’ve never been able to explain what the image means or what could have happened to leave a memory trace like that.

So many impossible things have been happening lately, and I’ve wondered about this one again. What can it mean? I wonder if perhaps there was a typical, far smaller stone that did fall from the sky in front of my eyes, and my little brain turned the memory into something more dramatic. But surely my mother would have remembered even that. Did I see it in a movie? Did I dream it? Being so young, was I unable to distinguish dream from reality? Something happened, even if only in my mind, something significant enough that it is still with me. What did it mean?

A week ago something else happened to me that seemed like it couldn’t have happened, something that was even more improbable than the burning rock in the grass and that strangely feels less real in my memory. The only person who can corroborate it is the one who caused it, and perhaps that person experienced something completely different from what I did. A couple of friends who were also in the building could tell you that I described it to them right afterward and that I was visibly shaken, but they didn’t see the actual event. Did I misinterpret it? Did my mind turn it into a more devastating missile from the heavens than it really was? All week I have asked, What does it mean?

And meanwhile, and before, other unthinkable occurrences took place. Entire cities burned to the ground, houses disintegrating in literally seconds. Far away, we destroyed another city “to save it.” People there who were just going about their business were obliterated by explosions from the sky, and their homes turned to dust as fine as the typical meteor. Others, here, were going about their business when an unprecedented rain of death poured down on them from high in a hotel window. Many are still struggling to find even the most basic necessities for survival after having their homes drowned or pummeled flat by the storms weeks ago.

More and more, every morning I turn to some source of news with dread in my heart, bracing for whatever new horror has taken place while I slept. Maybe you are this way too, waiting for the next shockwave, the next stone to fall. I know that whatever I complain of personally has no comparison to the immensity of tragedy that has befallen myriad human beings during this incredibly difficult year. I know, just as surely, that I am affected by all of it and so is each one of us, and the whole of us.

And I know that my perspective right now is skewed, especially since I’m recovering from a procedure during which the doctor did his best to terrify me about my future health— another unexpected blast from above. I haven’t yet been able to dig out from under the rubble. Yet, what feels like such dark, heavy boulders may be no more substantial than the meteorite of my childhood.

This is what it wasn’t:
http://www.grindtv.com/random/man-claims-found-burning-meteorite-yard-real-video/

I searched for the origin of the photo used at the top of this post, but could not find anything clear, so cannot give credit for the image.

Filed under the unexplained