Where Does Music Really Come From? More on Rosemary Brown 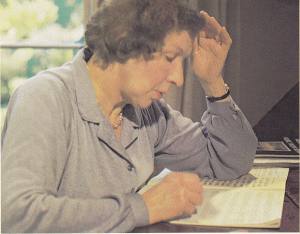 Rosemary Brown at work on the mazurka in D flat

The music of Rosemary Brown is the subject that has brought people to my blog more than any other.  My writing about her has put me in touch with some fascinating people in faraway places, and just recently that has led to my being given another album of Brown pieces as .mp3s, plus a collection of Brown sheet music I hadn’t seen before.

Through a series of e-mails begun with, if I remember correctly, a reprint of my original article on Mrs. Brown in The Ground of Faith, I’ve had the good fortune to become acquainted with a Brazilian musician and composer, Guilherme Tavares, who has supplied me with a lot of these materials, and also did me a tremendous favor by editing my own recording of “Grübelei.”  A circular sort of Web process brought some of the recordings to Guilherme, involving other people with strong interests in the Brown phenomenon:  Ademir Xavier left a comment on my blog about Érico Bomfim, who is trying to record all of Mrs. Brown’s work, then Guilherme contacted Érico, who sent recordings to him, which he passed on to me, and I am now making available to you.

Guilherme also found a BBC radio program about musical mediumship, from three years ago, and recorded the section about Mrs. Brown.  He asked me to transcribe it, and I am posting it here.  It includes the moment when “Grübelei” came into the world– a fascinating moment in which the most hardened skeptic would be hard pressed to believe Mrs. Brown was faking.  I’m going to save further comments on the new material and on Mrs. Brown in general for the next post, but for now, I’ll say that I’m especially intrigued by what she said about all composers perhaps getting music from a central source beyond themselves, possibly transmitted to them by intermediaries, just as the composers themselves were transmitting music to her.  This has been my meta-question about Mrs. Brown’s work all along– where does music really come from?  If Liszt or Beethoven or whoever give music to Mrs. Brown, where are they getting it?

I remember one of my piano teachers, Jane Viemeister, who’s a competent composer herself, saying that music is like an endless waterfall; all you have to do is take your bucket and scoop some up, and there’s always more where that came from.  Arlo Guthrie once said that music was like a stream going by, and it was his job to dip out the good stuff before Bob Dylan could get it!  Many composers have reported feeling that they were simply writing down music that was being dictated to them by some higher Source, perhaps even God.  Yet, every composer has a recognizable, individual style.  I still find this all mysterious– especially when a poem pops unbidden and fully formed into my head.  I can’t write music, but my best work does tend to happen in much the way those composers describe.

The conclusions, or rather non-conclusions, reached during this radio program are pretty close to my view of the subject.  Except that, having lived with a spirit close by much of the time, getting mixed up in my daily life, I don’t have any problem believing that Liszt could advise Mrs. Brown on the price of bananas in the supermarket.

“Music from Beyond the Veil,” hosted by Professor Paul Robertson on BBC Radio 4, first aired July 14, 2009.

[A rather rough recording of “Grübelei” plays in the background.]

Mrs. Brown:  It really began when I was a child.  I had a vision of Liszt, but at that time I was not aware that this was Liszt, because I was too young to have seen pictures or photographs of him.  And he told me that when he was on the earth, he was a famous composer and pianist, and that when I grew up he would give me music.  After Liszt had established a link with me, he first brought Chopin, but then he began to bring others, and there is now quite a group communicating fairly regularly.

Robertson:  A group which included many of the greats, Brahms, Debussy, Schumann, Schubert, even Bach, Beethoven, and Mozart.  This piece of music, recorded in 1969, is attributed to Franz Liszt, yet it was recorded nearly 80 years after his death.  He chose as his musical intermediary, if we are to believe her account, a quietly-spoken, unassuming housewife from Balham.  Her name was Rosemary Brown, and she created a stir in the late ‘60s, when her musical mediumship added dozens, and eventually hundreds, of new compositions to the musical canon of Liszt and his group of famous friends from beyond this earthly veil.  As a musician myself, a violinist who spent most of his career leading a string quartet, you could say that I too am a medium, but when I aim to express some long-dead composer’s intentions and emotions, I believe I’m working from a musical score.  Yet, I’m fascinated by the mysterious connection between music and our spiritual lives, not least the question of where seemingly transcendent musical inspiration comes from.

In 1969, BBC Radio 3 broadcast “Music From the Dead Composers,” an hour-long program which took a close look at Rosemary Brown’s claims.  During the program, Rosemary described how she received new compositions from beyond the grave.

Mrs. Brown:  Liszt, who was the first one to give music to me, has a way of controlling my hands.  I think quite a few people will have heard of something called automatic writing, where a spirit controls the hand of a person here, and writes through them.  Well, in this case, Liszt somehow contrives to control both my hands, so that he can make them play the music, and he plays the same phrases over several times, while I watch and try to memorize the notes, and then I’ll write it out afterwards to the best of my ability.

Robertson:  In May 1969, during the making of “Music From the Dead Composers,” presenter Geoffrey Skelton and his producer Daniel Snowman visited Rosemary’s home, a small end-of-terrace house in Lakewood Road, Balham, to record with her as she received her music.  Forty years later, Daniel Snowman can still remember how Rosemary sat at the piano waiting for inspiration to strike.

Snowman:  It was a very emotionally low-beat occasion; there was no sense of a séance or of magic or tables moving or all those things.  We simply turned the machine on and sat there, with her obvious agreement– she gave us a cup of tea and all that– and we sat.  And she would, every now and then, mumble various things– not sure whether they were to us or for us, or to somebody [chuckles] from the dead.

Snowman:  And then she said, “Oh, yes, Liszt, Liszt is here now.”  And Liszt apparently dictated to her a difficult piece called “Grübelei.”  And she was mumbling back and forth with him, in English, “What? Five-four in the right… and a different… and the key signature, how many sharps?  And three-two in the left?”  You know, kind of, “If you say so, Maestro.”

Snowman:  And then gradually the thing seemed to come together.  She tried to play it, couldn’t, Geoffrey had a go, and it came together as an interesting piece.

The most extraordinary thing to me about that piece she produced in our presence, “Grübelei” by Liszt (supposedly), was that somebody of the ability and authority of Humphrey Searle, a great Liszt expert at the time, you know, looked at this piece and said, “Yeah, it’s very much like the kind of piece he was experimenting with towards the end of his life.”  It’s an extraordinary piece for somebody to simply do a pastiche of Liszt, to come up with something like that.

Willin:  Well, I had quite a lot of correspondence with Rosemary when she was alive, um, and I’ve looked at a lot of her music and I’ve done a lot of tests on it, and I’ve discussed it with possibly thousands and certainly hundreds of people.

Robertson:  Dr. Melvyn Willin describes himself as being a paramusicologist.  As well as being a music teacher and performer, he researches cases where music apparently meets the paranormal.

Willin:  And what do I have to say?  Um, I think that she was genuine, I think she was tapping into something.

Robertson:  So when you say genuine….

Robertson:  She was sincere.

Robertson:  OK.  But do you think she was, in your terms, a genuine medium for something she couldn’t otherwise have achieved?

As to her music, it’s always come across to me, and to others, as a rather good pastiche of the actual composers.  But having said that, I wouldn’t say always, and that’s the frustrating thing, because I can’t say that no, I think all her pieces were pastiche.  I have to say that I think an awful lot were, but there was the odd one or two, that I just think, I don’t know how she did that.

Robertson:  So where does that leave us with the intriguing case of Rosemary Brown?  Not even her most ardent critics accused her of being fraudulent, or of somehow deceiving the public, and she was clearly sincere in her belief about where her talents came from.  It’s interesting, though, to hear her in an interview of 1967, describing her composer friends from the other side as themselves intermediaries for something greater.

Mrs. Brown:  Well, it seems to me to come from a central source of inspiration, as if there were spheres of music, and I think it is channeled down to me, as perhaps it is channeled down to other composers, by various intermediary beings, spirits, whatever you like to call them.  And in this instance, I think there are people who have been composers upon the earth, trying to channel the music to me.

Robertson:  I’ll leave the last word to Leo May, who is as certain in his conviction as Rosemary Brown was in hers that he’s channeling the spirits of dead musicians, in his case, those of Enrico Caruso and Mario Lanza.

[An interview begins]  So in a way, it’s not a million miles different to having a talent and then having a duty to serve that talent.

Robertson:  And is that quite important, to feel that?

May:  It is indeed important, yes.  Indeed it is, to serve it.  I want to serve the spirit world, which I know, if anybody says to me, “do you believe in the spirit world?” I say, “No.  I know it.”  And there’s the difference between knowing it and surmising that it might be there.  I know it.  Without a doubt.

http://www.arends-musikverlag.de/rosemary-brown/
Where you can buy Rosemary Brown sheet music and recordings.

https://app.box.com/s/isl0e5ybqgm84ljdusvi
My own recording of Liszt’s “Grubelei,” with some engineering help from Guilherme Tavares.

http://www.youtube.com/user/xavnet2
Ademir Xavier’s YouTube Channel, where you will find Érico Bomfim playing some Brown works, as well as a couple of interviews with Mrs. Brown.  Xavier has a blog, Era do Espírito, at http://eradoespirito.blogspot.com.

My earlier post, “The Music of Rosemary Brown from a Pianist’s Perspective.”

15 responses to “Where Does Music Really Come From? More on Rosemary Brown”